The History of Island Appliance

The story of Island Appliance is a love story. You may be thinking that appliances are not very romantic but you would miss the truth of the story.

In the very early 80's a late 30ish man and similarly aged woman became acquainted at work. A cordial but very distant acquaintance developed. The lady left the business to pursue other interests but the man wanted to know her better. He kept driving by her house until he "accidentally" ran into her. Time passed, the relationship grew and eventually they married. Each enjoyed the others company so much that they wanted to spend as many hours as possible together. A family business seemed like the best way. 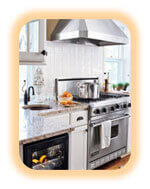 After investigating many options, they selected a retail appliance store on the barrier island where they lived. Remember this is a love story. She planned everything on their dining room table. As all good love stories go the relationship was fulfilling and the business grew. The store, named Island Appliance for its' origins eventually attracted so many customers from the mainland that logically, after 15 years, it was time to move off the island.

The new store on the mainland with 9,000 square feet was a dream compared to the 35 X 60 building they occupied for 13 years. With kitchens that worked and home-like displays the new location had everything anyone could want...Except customers...Yes, as frequently happens, the old customers didn't drive the 8 miles to the new store and the folks close by the store didn't know it was there. 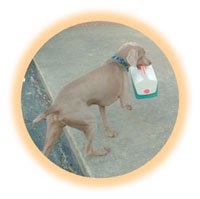 Don't forget - this is a love story. Enter Taylor, the Weimaraner grand-puppy. He was so cute and lovable that the couple decided to make him a star. He was featured in a commercial playing tug-a-war with a customer who said-"I'm not shopping today. I just came to visit the dog." Everyone fell in love with Taylor. Quickly customers flocked to the store bringing Taylor dog biscuits because they weren't shopping. They just came to visit the dog. Miraculously, customers did come and they did purchase appliances. Taylor reminded folks that Island Appliance is a great place to shop.

So now you know the 28 year love story of Island Appliance. From the couple who met at work, fell in love and planned a successful business on the dining room table to the grand- puppy who saved the store and grew to star in many commercials.

All three, Mike, Carlene and Taylor are still at the store, still in love and most of all still love to come to work every day with all the folks that make Island Appliance a special place.

Tell Us About Yourself

We're proud to be a small, local business and we want to get to know our customers.

We appreciate it! Please don't hesitate to contact us if you have any questions.